Interview with Nancy I. Sanders About Her New Book, America's Black Founders 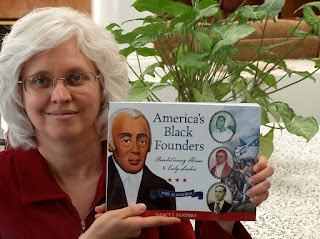 What a privilege it is to present an interview with my guest (and good friend), Nancy I. Sanders! We'll be discussing her book, America's Black Founders. Get ready for some jaw-dropping information.

Q: Nancy, in your new book, America’s Black Founders: Revolutionary Heroes and Early Leaders, how did you go about choosing those particular unsung heroes?

A: I’ve been doing research about the early years of our nation, and the names of these founding fathers and mothers were everywhere I turned! Today, in the city of Philadelphia, there are historic markers with their names on them. In various city and state archives, there are historic documents with their names and their signatures on them. In newspapers from that era, there are articles written by them. In the records of the Revolutionary War, there are documentaries about their heroic deeds. The African Americans I included in my book from the founding years of our nation were community leaders and influential men and women of their day. I simply brought their amazing stories out of the dusty pages of history and into the light of our generation.

Q: How exciting! Nancy, give us a time-line for this book, from coming up with the idea to its publication.

A: Here’s how it happened:
 April, 2005: I first got the idea to write this book. I felt God calling me to share the story of Richard Allen, a great man of faith and strong Christian leader who was also a Founding Father of America. I let the idea germinate and grow inside me until I felt it was strong enough to share.
 March, 2006: I pitched the idea for this book over the phone to Chicago Review Press, the publisher of my book, A Kid’s Guide to African American History, and the publisher requested a proposal.
 October, 2006: I submitted the proposal to the publisher.
 November, 2007: Editor Jerry Pohlen called me on the phone and offered me a contract. We set a one-year deadline. Wahoo!
 January through December 2008: I wrote the book. A lot of prayer went into working on this manuscript, and I spent a lot of time sitting at the feet of Jesus while working on this book. Because Richard Allen and most of the men and women in this book were strong Christians who devoted their lives to sharing the Gospel, I wanted to make sure I was listening to God’s heart as I worked to tell their story through this manuscript.
 December, 2008: I finished the book and submitted it for my deadline.
 January, 2010: America’s Black Founders hit the market, already racking up presales of over 1700 books.

From the time I first got the idea for this book in April, 2005 until I signed the contract in December, 2007, I worked on other book deadlines. Then I cleared my plate of most other deadlines so that for an entire year, I could devote my energies and focus on the intense research needed to write this book. It was a very challenging, yet very very rewarding journey to take.

Q: America’s Black Founders, features 21 activities. What significance are these activities to this era in history, and how did you go about writing them?

A: Each activity in this book holds important significance surrounding the history of America’s Black Founding Fathers and Mothers. For instance, there is a recipe for Pepper Pot Soup in my book. This was a hearty dish that George Washington requested be cooked for the troops at Valley Forge during that long, cold winter when many of the troops were starving. There were quite a number of black troops who suffered along with the other patriots at Valley Forge that winter, so this is a dish they probably ate.

Another activity encourages students to “pen a patriotic poem.” This activity is included in the book because of Lemuel Haynes. A black minuteman, Lemuel Haynes marched with his company from Granville, Massachusetts to join the Siege of Boston. The battle of Lexington had just occurred and militia poured in from all over the region to camp outside of Boston and not let British troops molest the countryside again.

Lemuel Haynes and his company camped outside of Boston as well. While there, Lemuel Haynes was so moved by the account of the battle of Lexington that he wrote a stirring ballad about the event. He titled his poem, “The Battle of Lexington.” His handwritten poem from 1776 is still in existence today! I located the poem and included the image of it in my book. Then I encourage students to follow Lemuel Hayne’s example and write a poem themselves to honor a great moment in history.

To help make a list of activities to include in my book, I researched various historical sites and explored the types of activities they did with students visiting their sites. I even communicated with the activity director of one historic site who helped explain how they had students make a stuffed straw mattress. I included this in my book as an example of the type of work children had to do who were slaves and lived in homes in cities such as how Richard Allen spent his early childhood days in Philadelphia working as a slave of prominent colonist Benjamin Chew, attorney general of the Province of Pennsylvania.

I’ve written a number of activities for other books of mine. Usually, once I determine an activity that has value, I make it. I might not make the entire activity, as I didn’t make a full-sized stuffed straw mattress, but I worked with folding a small piece of fabric and stuffing it. I relied on my conversation with the activity director to give me the confidence to know this was an actual project that kids could successfully do. Even though the step-by-step process to make these historic-based activities might not be exactly how they were made, the process is “based” on the real activity and students “feel” like they’re making something real.

Many times, I take a lot of photographs of each step of making the activity. For instance, when I stitched together a fanner, or basket used to winnow rice, I took photos of starting the fanner, making knots, and adding rows to the basket. I took photos of the fanner on a table for each stage of the process. But I also took photos of holding the fanner and the needle in my hands to actually show students how they should hold it as they make it, too.

When I submitted my manuscript, I also submitted all these photographs. The publisher forwarded these to the artist who used exact images as reference to the drawings that were included with the instructions in the finished book. Many publishers ask for these photographs when activities are featured with a manuscript, so now I just automatically take the photographs when I make the sample activities and submit them on a disc with the completed manuscript, even if a publisher doesn’t ask for them. They are always so grateful!

Nancy, thank you for sharing these treasures about some of American's most amazing and influential men and women. America's children need this inspiring book!

Thanks, Sherri, for inviting me to be a guest at your blog! Hugs, Nancy

Nice interview and glad to find out more about how you put this book together. Thanks Sherri & Nancy!
~Tina Cho

I think Nancy Sanders is an awesome write and a special person. Sherri, it is nice to find your blog.

Thank you, Sherri and Nancy. I'll bet this new book will be a favorite with teachers and home schooling families.

To everyone who commented on Nancy's interview and her amazing and NEEDED book---spread the word to teachers! This book needs to be read by every elementary school child. So many unsung heroes is this book that will inspire and amaze our young generation! Send your writing friends and teachers to this blog interview 9o;